Little Spooky was 10 weeks old when we brought him home, on a very snowy day in February 2005.

The weather was fine when we left home but by the time we collected Spooky and got back to the car there was a blizzard blowing. We had an hours journey home with dreadful weather and to top it all the car broke down too! Not the best start for a little baby bunny. 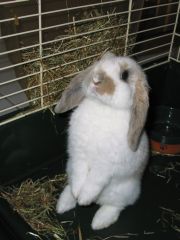 Spooky was a very cute little fella who was always full of mischief.

He was without a doubt the most difficult of our 3 bunnies during the early months of his life. Before we had him neutered he was very feisty and could spray from one side of the living room to the other! Good job he was so cute!! (and that the wallpaper was easy to clean.) We had not experienced any spraying with the other boys, so it was a bit of a shock!

Spooky and Bugs got on very well together most of the time. Although Spooky was a year younger he was definitely the dominant one. Poor Bugs went through quite a bit of "dominance" during Spooky's "teenage" stage, but did get his own back every now and again. Bugs also liked to tug at Spooky's fur if he was laying in his favourite spot.

Spooky just loved to eat! Cabbage, carrot, celery leaves, apple or cucumber, I don't think he had a favourite. He always ate so fast and would then go and steal anything that Bugs hadn't finished.
Spooky was at his funniest when looning and binkying around the floor, he loved it! When Spooky came out on the sofa in the evenings he loved sitting on my lap having a cuddle. 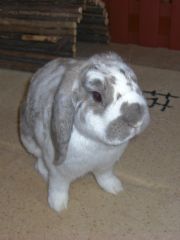 Unfortunately, Spooky had to have an operation in November 2008 to remove rather a large lump from under his ear. It was a very stressful time but it went OK, until I found another lump growing just weeks later.

Luckily the lump didn't seem to bother him at all. He was absolutely fine, even when we noticed the new lump becoming a little softer a few months ago, he was still just my Spooky.

It was only at the beginning of July 2010 that he started to lose weight despite eating more than ever. On 4th August 2010 Spooky suddenly deteriorated very rapidly and was put to sleep.

I will miss my gorgeous little boy very much and I will always love him dearly.
RIP and binky free my beautiful little angel.