Stuy was born in October 2003 and came to stay with us in November 2003 at just eight weeks old.
He was my first pet and I remember being so excited but very nervous, as there is always so much to learn when looking after another little life.
Stuy was a very sweet, gentle and affectionate bunny. He  loved to get up to mischief and was always trying to get where he shouldn't be.

He also loved to chew, especially things he was not supposed to like wires, wallpaper and carpet. But who can be mad at such a cutie?
When Stuy was two and a half months old he had photo shoot. We took so many pictures with all sorts of different props, this is one of my favourites..........
"When can we go for a ride? But have you got a helmet to fit me, Mum?" 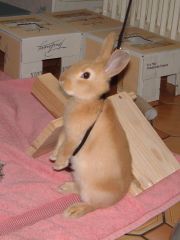 Stuy was always very inquisitive and played with whatever we give him, cardboard boxes, balls or plastic tubes. One thing he didn't enjoy though was being put on a lead. As this photo clearly shows, he was not a happy bunny!

You won't be surprised to learn that after that look, I never even attempted to use the lead again.

His favourite foods had to be apple and dried bread (only given in very small quantities as a treat).

This photo was taken in December 2008 when Stuy was over 5 years old. He enjoyed running around the living room and binkying across the rug. After which he loved being on the sofa, next to us, having his nose rubbed, he would sit there for ages. His other favourite pass time was the nightly ritual of cleaning (licking) my arm, again he would do this for quite sometime, before demanding a nose rub from me again.

You can see from this picture that Stuy managed to roll his plastic toy ball in to his water bowl. He seemed quite pleased with himself, but never learnt to get it back out!

My gorgeous little fella passed away on 14th August 2011 at nearly 8 years old. I will miss him and love him always. He was more than just a rabbit, he was a beautiful soul.